Growing up at Guantánamo 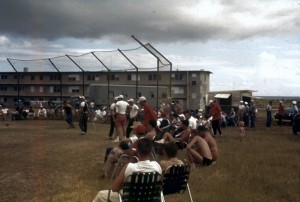 I was unaware of the history of Guantánamo Bay before starting this project; I had only heard of its modern status as a detainment camp.  I was surprised to learn about its past history as a military base and of the families that lived on the base for many years.  It was a community and those who lived within the fences believed it was a “cherished childhood” for the children.  Horseback riding, swimming, and various sports and recreational activities were favorite pastimes for many.  Children and teenagers alike had opportunities to travel and the freedom to do so.  I was amazed to learn that parents believed that GTMO was a perfect place to raise children.  I learned much about the culture of Guantánamo Bay from Memories of Guantánamo Bay, 1960-1962, a personal account from Janet Miller.  Miller explains the wonderful childhood that her two children had even with the ongoing problems with the Cuban government and her own troubled relationship with her husband.  Her children were able to develop close relationships with the Cubans and explore the base with freedom.  Their maid, Andréa, became a close member of the family whom Miller went out of her way to try to help.  Even though it was considerably different from life in the United States, from climate to surroundings, the families still tried to have what felt to them like a normal life; kids had the same comforts of movies, sports, and school that they had in America.

At the same time, though, GTMO was a place where many Cubans worked.  There was cultural mixing between the people; those who lived on the base and those who worked on the base from the outside.  Americans formed relationships with the Cubans and in some cases a familial bond was formed (as the case of Janet Miller and her maid Andréa).  Language barriers were broken and sense of community was formed.  I was shocked to realize what the Cubans had to go through during the 1950s-1960s with the rebellion and military crisis and the effect it had on the base.  Cubans had to be in constant fear of losing their jobs or of their families being in danger.  Through an oral history interview with Ana Maria Ward, a former resident of Guantánamo Bay, I learned that many people on the base had little knowledge of the revolution and violence that was going on outside the fences. Ms. Ward describes being able to smell the fires of the revolution but not knowing what exactly was happening.  While Cubans were struggling in their own country; most of the Americans on the base were leading normal lives.

I chose the picture of men playing baseball at GTMO because it represented the many activities that one could do on the base.  People still played “America’s greatest pastime” in this foreign place.  To me, it was like GTMO wasn’t so different from the United States; people still gathered within a community and took part in various activities such as sports.

I really believe we can learn from looking at the past of Guantánamo Bay.  When Guantánamo Bay is in the news now, it is always something to do with the detention camp.  But this place surrounded by controversy was once a thriving neighborhood full of families–one where American children were able to explore exotic-seeming places, swim in the ocean, and learn about a culture different from their own.

Posted by Hayley M. Whitehead – student at The University of North Carolina at Greensboro

3 Comments to: Growing up at Guantánamo

Hayley– I was surprised as you to learn the complexity of Guantanamo’s history! Reports of life for families like Janet Miller’s seemed to follow a comforting narrative popular when describing life in the 50s and 60s (white picket fences, Elvis, baseball, etc); a life we in affluent, white America might call normal. However, as we know, life during this era was more turbulent than our nostalgia allows. Massacres were occurring in Vietnam, the Civil Rights movement was in full swing, and women were struggling to gain political and reproductive rights (to name just a few political conflicts). Instead of remembering the fear, pain, and struggle of these events, we conjure images of tranquility and take refuge in American icons and traditions. The tendency to down-play political conflict to remember history positively seems to hold true for life at Guantanamo as well. When Janet Miller writes her story about the ways her children thrived in Guantanamo, I wonder if its because as a woman of relative privilege at the base, the Cuban’s struggles were not part of her daily experiences. If there had been such a sense of “community” at the base in which “language barriers were broken”, how is it possible Janet Miller reports being ignorant of the “revolution and violence” happening just beyond her doorstep? I wonder how the Miller’s maid, Andréa, remembers this era. I wonder, for that matter, how Andréa remembers her relationship with the Miller family.
Janet Miller’s accounts of life on the base were endearing, but there is likely only so much her experience as a white American military wife allowed her to see. The truth of the base at Guantanamo, and part of the complexity at which you were hinting, is that it represents a place where American imperialism still lives. Janet Miller’s family didn’t move to Guantanamo for the good schools or for her children to be able to mingle with people from a different culture. Her family was part of a larger, ongoing strategy to maintain control in a region that is not geographically part of the U.S. but that is uniquely tied to the U.S. and its political interests by legal ambiguities and by our fears of Communism, terrorism, and immigration.
Thanks for posting!

Before reading your post, I knew very little about the ways of life on the base, but I am pleasantly surprised to read that base-life for most Americans, was just the way they might have lived in America, had they/or their loved one not been relocated to the base. It does not surprise me however, the way the Cubans on the base were often fearful of losing their jobs because of their lives outside the base. I find it very interesting the possibility that some Cubans could have been working on the US Naval Base at GTMO as well as members of the rebellion party in Cuba. It seems to me, the two experiences would have vast contrast, to have experienced life on a United States Naval Base, having seen the ways of life for the Americans on the base as well as leaving the base to return to an island with a government in turmoil. Your post has enlightened me to a GTMO that is unlike the one I have always imagined. The GTMO I know does not have interracial baseball and basketball games between people on the base, because they were prisoners being tortured in the GTMO that I have known.

Posted by Henry F. Bertels – student at the University of Minnesota-Twin Cities

Hello Hayley, like you and some Americans, we do not know that much of Guantánamo Bay. I only knew it from the movie “Harold & Kumar Escape from Guantanamo Bay (2008)” and that it is U.S. Naval base. By reading your blog, Guantánamo is more than a base. It a home to some people and a work place for some Cuban residents. But at the same time, it is a historic battle field between the Cuban and the U.S., Communism versus Capitalism, and “US” verse “Them.” Guantánamo Bay has allow the U.S. to built some positive relationship with the local when the Cuba residents work for the Naval base. This shows that if we can work in small scale, maybe one day we can work in larger scale. We just need to find some common goals and some common ideals to built a positive future. The past in Guantánamo Bay shows it can be done, therefore we can create a better future. It a good memory for some children who get to live and some almost frighten experience such as the “Cuban Missile Crisis.” Some people see that growing up in Guantánamo Bay prove that our next door neighbor are people who want a living income and people who care about their work like an regular Americans. I really believe that if we continue to produce a positive relation, one day we can live more than Guantánamo Bay. We can even beyond the base and live within the Cuban community.