States of Exception: Not Exceptional

Guantánamo exists as a “state of exception” which has legitimated extraordinary policies, practices, executive measures, and laws since the US signed the lease agreement with Cuba in 1903. The lease gives Cuba sovereignty but grants the United States absolute jurisdiction over the land. This lease can only be revoked if both countries, namely the U.S., agree. This type of “legal black hole” has allowed the U.S. to use the land to hold those who fall between the boundaries of national identity and legal protection. Such populations have included Cuban workers after the revolution, Haitians with HIV seeking political asylum, and most recently “enemy combatants” of the War on Terror. 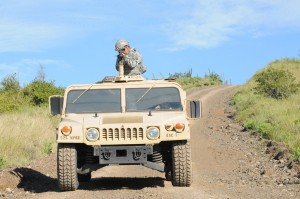 A US military serviceman patrols the US border with Cuba at Guantánamo. Photo courtesy of Department of Defense.

Australia, in recent years, has been faced with a situation similar to the 1990-1994 influx of political refugees to Guantánamo, with similarly frightening outcomes. According to The Guardian http://www.guardian.co.uk/ this year alone has seen over 7,900 refugees from countries such as Afghanistan, Sri Lanka, and Iran enter Australian waters from Indonesia in search of political asylum. Offshore processing on Nauru and Manus Island (Papua New Guinea) which began in 2001 ended with the Labor party’s involvement in 2007 but will continue, pending recommendations handed down in August of this year. This offshore processing has caused an outcry regarding detention standards and human rights concerns. In 2001, Nauru closed its borders and disallowed all visitors, including tourists and journalists, from entering. In 2003, about 400 detainees from Iran, Iraq, Pakistan, and Afghanistan fleeing the Taliban and Saddam Hussein remained on Nauru living in similar conditions that those who were deemed “terrorists” by the U.S. were suffering in Guantánamo.

Holding human beings with no promise of a future, and a past that they cannot return to, results in a feeling of inhumanity. Without work and little to do, authorities noticed in Nauru that detainees became lethargic and morose with anxiety manifesting in physical ways. These types of experiences were documented in the 2003 episode of This American Life entitled “The Middle of Nowhere” http://www.thisamericanlife.org/radio-archives/episode/253/transcript. Similar to those detainees from Cuba and Haiti on Guantánamo, the main complaints included sleeplessness, back pain, headaches, feelings of faintness, speech impediment, and self-mutilation. The imprisonment of Haitians at Guantánamo caused many to refuse to participate in any way in their own detainment. They refused food, shelter, life-continuing medication, and nutritious fluids as the only personal choice that could be made persisting in this rightless state.

States of exception exist in many forms throughout the world. These locations are dangerous territories for legal abuses and human rights violations. This type of model produces the same results in every case. We, as part of an international community in a globalized world, need to develop better ways for those seeking political asylum to achieve it. Putting populations in the position to face treacherous sea expeditions to reach land only to be indefinitely detained is unacceptable. There needs to be an effort to better manage refugee populations closer to their “home” countries and without the use of these states of exception outside of the public gaze.

What is the best way to deal with large immigrant and refugee populations?

New York University is participating in the Guantánamo Public Memory Project‘s National Dialogue and Traveling Exhibit. Opening at NYU’s Kimmel Center for University Life Windows Gallery in December 2012 and traveling to 9 sites (and counting) across the country through at least 2014, the exhibit will explore GTMO’s history from US occupation in 1898 to today’s debates and visions for its future. The exhibit is being developed through a unique collaboration among a growing number of universities as a dialogue among their students, communities, and people with first-hand experience at GTMO.
Tags: Guantanamo Bay Naval Base, Human Rights
Tweet

5 Comments to: States of Exception: Not Exceptional

Great article. Fortunately Rewolinski has more courage than most to address this situation.

Very interesting and informative. This is an important subject that needs to be dealt with in a humane way.

Thank you for a thoughtful reflection, Dawn. Recently, a student in class remarked that after learning more about the world through his college readings, he feels like he has been misled his whole life into thinking everything is puppies and rainbows. While I never had illusions about puppies and rainbows filling our world, I am frequently discouraged in reading about how often we abuse our fellow human beings. In researching Guantánamo we expected to confront the representations of terrorists as victims of abuses, but have largely forgotten the scores of people who were held there “with no promise of a future” in decades past. And sadly, your post is the first I’ve learned of the refugees flooding to Australia and held in similar detention. How sad that we, as global citizens, are replaying this scenario in another legal black hole. Can we figure out a best way to deal with immigrant and refugee populations, and importantly, can we give these immigrant and refugee children a few more years of puppies and rainbows before they have to worry about the fear, uncertainty and stigma of indefinite detention and inhumane treatment?

Dawn – I think you bring up some very significant issues. First off, I was surprised to learn that there are indeed other concrete examples of states of exception besides the base at Guantanamo Bay. But I suppose that is one of their key attributes: relatively little public exposure that contributes to an overall sense of detachment from the host nation’s ethical identity. Obviously, most of us who have studied the history of Guantanamo would prefer if its uses were documented and spread to the widest possible audience, so as to prevent its continued legal obscurity. On the other hand, and perhaps more importantly, I’m wondering why countries like the United States and Australia feel the need to sustain these states of exception in the first place. Are their normal proceedings somehow not applicable to the individuals being held there, or is it just a matter of convenience? The U.S. government has systematically argued for the former, but I believe many are unconvinced. This issue also begs answers to the possible existence of other states of exception that absolutely no one in the civilian population is aware of, or the possibility that an even more unethical situation could arise if Guantanamo is closed as a holding facility. In the end, I think it comes down to a matter of perceived threat versus civic responsibility, and the historic record has shown that perceived threats tend to be amplified as political leverage in democratic states.

It seems almost shameful that a country that boasts of freedom doesn’t, at times, seem to respect the freedoms of people from other nations seeking better lives for their families. This lack of respect sets a bad example for other countries, like Australia. The ingenuity of Americans never ceases to amazing me and it is this ingenuity that we should be using to solve these types of problems and concerns in the world. We are an exceptional country that was founded on a search for a better life. There should be no exceptions when it comes to respecting people and their right to seak and work for a better life. Thanks for your post, Dawn!