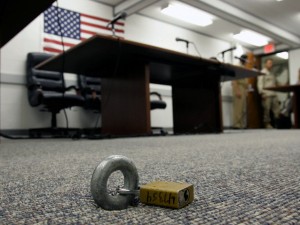 The Administrative Review Board room is seen with eye bolts for securing detainees at Camp Delta at the U.S. Naval Base Guantanamo Bay, Cuba January 18, 2006. Courtesy Reuters.

February 19, 2013: Guantánamo detainee Walid bin Attash berated the judge of his military commission hearing after guards searched his cell and confiscated confidential correspondence between him and his attorney.

February 19, 2002: The Center for Constitutional Rights filed the landmark habeas corpus case Rasul v. Bush to challenge indefinite detention at Guantánamo and the lack of legal protections available to detainees.