June 18, 2013: The Obama administration released for the first time the names of 46 men it wants to detain indefinitely at Guantánamo without charge or trial. 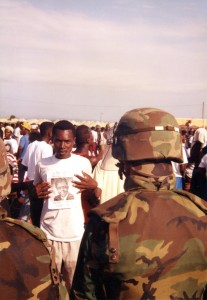 A Haitian refugee and US soldier meet at the holding camps at Guantánamo. Photo courtesy of Merrill Smith.

June 21, 1993: Guantánamo’s Camp Bulkeley, an “HIV prison camp” according to a Federal judge, closes as the last Haitian refugees detained there arrive for resettlement in Miami.