September 11th continues to elicit painful memories of the terrorist attacks on the World Trade Center, the Pentagon, and Flight 93.  At the University of Massachusetts-Amherst this year, the attacks were remembered in a number of ways.  In addition to an on-campus vigil for those who perished, students were encouraged to consider some of the legacies of 9/11 at the opening of the Guantánamo Public Memory Project traveling exhibit’s fifth stop.

The traveling exhibition was curated by students from eleven universities across the country to raise contemporary issues, such as incarceration, national security, detainee and refugee rights, and official memory, grounded in the long and contested history of Guantánamo Bay, Cuba.  Each team of students created one piece of the exhibit.  Graduate students in the Public History, Architecture, and Historic Preservation programs at the University of Massachusetts-Amherst titled their portion “Where is Guantánamo?,” exploring not only the geographic location of the base, but its location historically and symbolically in US and Cuban history.  In addition, UMass professors and students channeled the emotion of the anniversary of 9/11 into their first panel discussion, “The Clash of National Security and Civil Liberties,” as part of a larger panel series titled, “Why Guantánamo?”

I made the drive from New York City to Amherst, MA to see UMass’s take on the Guantánamo Public Memory Project.

The opening forum featured Yale Law Professor, Akhil Reed Amar, and ACLU Deputy Legal Director, Jameel Jaffer.  Professor Amar, author of several works on the US Constitution including the recent work, America’s Unwritten Constitution: The Precedents and Principles We Live By (Basic Books, 2012), reminded audience members of the limits of democracy and the potential for democratic endorsement of human rights violations.  He noted that the US Constitution was incredibly democratic for its time, but equally pro-slave.  Democracy accounts for the perspectives of those represented, but does little for “other” voices, such as those of the detainees at GTMO.

Jameel Jaffer elaborated on the secrecy surrounding post-9/11 GTMO.  While information exists about the experiences of detainees suspected of terrorism, including the use of “enhanced” interrogation techniques, CIA black sites, indefinite detention, hunger strikes, and the lack of legal counsel are known, the government largely continues to refuse discussing the specifics of such “classified” issues on the grounds of national security.  In the case that a detainee is offered a trial, any journalists or members of the public present are forced to watch behind soundproof glass.  Any information regarding the conditions of the prisoner’s detainment is drowned out with white noise.  Jaffer argues that this continued censorship, about facts that are already known and can be found online, allows the government to avoid accountability.

Opening up the discussion, the audience posed questions about the US and Syria, the use of drones in military warfare, and the role of journalism in holding the government accountable.  The range of issues raised alluded to the fact that Guantánamo represents one focal point of a much larger contentious debate on national security and the role of the US in the international arena.

Following the opening panel, audience members were encouraged to check out the exhibition installation at UMass’s Herter Art Gallery.  Here, the introductory panels of the exhibition lead visitors into two large spaces.  To the right, visitors continue to explore GTMO’s history and are invited to weigh in digitally and physically on the issues through text message or posting a comment to a corkboard.   To the left, the professors and students at UMass Amherst put the exhibition in dialogue with an exhibition on the Greenham Common Women’s Peace Camp.

Beginning in 1981, the Peace Camp marked the site of the 19-year-long women’s protest of the US’s installation of nuclear cruise missiles in Newbury, Berkshire in the UK.  The US had been loaned the land of the Greenham Common Air Base during World World II, but the land had never been returned.  In 1982, more than 30,000 women joined hands around the base in protest in the “Embrace the Base” event.  In addition to the authorities repeated eviction attempts, women faced lawsuits, fines, and imprisonment.  While the number of women at the base gradually dwindled, the camp continued to protest nuclear weapons even after the US left in 1992. The juxtaposition of the Greenham Common Women’s Peace Camp exhibition with that of Guantánamo encourages the viewer to consider even broader implications of US national security policy. 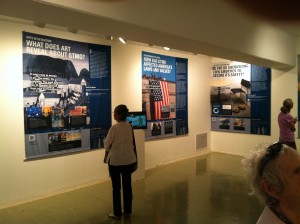 2 Comments to: Opening Night of UMass Amherst’s “Why Guantánamo?” Series

As a student at UNCG working with the Guantanamo Public Memory Project and planning programming and supplements for the travelling exhibit, I find UMass Amherst’s comparison between GTMO and Greenham Common Women’s Peace Camp powerfully resonant! Drawing those parallels to urge visitor reflection on the deeper implications of GTMO’s exceptional legal status is a thoughtful and genuine opportunity for visitors to react and understand that GTMO’s policies are not confined to the Cuban coast. I also appreciate the implication that GTMO’s policies not only effect our military and the Cuban people, but the broader American and international community.
As we debated how to develop the travelling exhibit in Greensboro, NC, our class decided early on that we also wanted to provoke these broader implications. In the end, we decided there was no better way to talk to introduce Greensboro’s citizens to GTMO than to bring Greensboro’s citizens into the discussion, to show them that issues raised at GTMO impact them here at home—but we struggled throughout the past semester with how to engage the visitor and truly make them examine their own opinions and beliefs. We decided on an approach, it seems, very similar to the one described here: we drew parallels to show visitors how universal these issues are. We looked at immigration, civil rights, and the impact of the Cold War, all aspects of GTMO’s history that Greensboro’s citizens could relate to and connect with.
I will look into the Greenham Common Women’s Peace Camp! You have peeked my interest!

Meghan Reed—M.A. Candidate in Public History at The University of North Carolina-Greensboro