After a great residency at the University of Massachusetts Amherst, our traveling exhibit is heading west once again. From mid-October until the end of November, our colleagues at Arizona State University will be hosting the exhibit. This is the sixth stop for the exhibit, and like every stop before it, ASU will add its own unique voices to our national dialogue, and its own particular approaches to public history to our material.

* A new, local connection to GTMO. In addition to highlighting GTMO’s function as an internment camp, our ASU colleagues will be focusing on the local legacy of detention, and particularly on the detention of Japanese Americans on tribal land in Arizona during World War II. Fostering these local connections is a great way to bring GTMO closer while also raising awareness about the often overlooked history in our own back yard.

* Borrow a ‘human book.’. Our traveling exhibit has visited libraries before, but this will be the first time it has encountered a ‘human library.’ Our ASU team had the brilliant idea of inviting visitors to engage in one-on-one conversations with ‘human books’ – people with expertise on or first-hand experience of detention, either at GTMO or elsewhere in the country.

* Films! To accompany the exhibit, Phoenix Art Museum will be hosting regular film screenings. Among the films on offer are the award-winning ‘Rabbit in the Moon,’ which explores the complexities of Japanese American detention during WW2, and ‘Dirty Wars,’ a recent documentary about the Global War on Terror based on the book by Jeremy Scahill.

* Location location location. As a public memory project, we are of course eager to engage the wider public at every opportunity. For this reason, we’re thrilled that our exhibit will be housed in Burton Barr Central Library, the impressive flagship location for the whole Phoenix Public Library system. Not only is this a fantastic location, but we’ll be reaching out to a huge number of Phoenix locals.

Our exhibit opens in Phoenix on October 19. For more about the exhibit and events, check out this flyer. 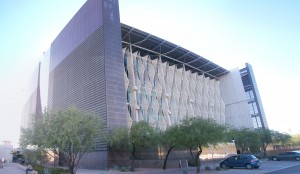