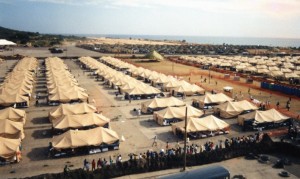 How does one “bring” Guantánamo to the United States? Can Guantánamo, as a symbol of imperialism and history of detainment, be compared to a national historic site in America? How do we challenge a community that would be largely offended by such a suggestion?

These questions, among others, are what drive my involvement with the upcoming traveling exhibit for the Guantánamo Public Memory Project. Along with four other students, I am developing an interpretive digital project that draws connections between The US naval station at Guantánamo and Historic Ft. Snelling in St. Paul Minnesota. Throughout our semester course readings on Guantanamo’s history the similarities between the spaces became increasingly compelling. Haunted by American imperialism and colonialism, both sites have histories of detention and the public memories of the spaces are drastically different. For both sites, American expansion led to treaty making and land leasing, a process that involved the displacement of people with prior claims to the land. Ft. Snelling exists on land that is considered sacred to Dakota people and many have argued for the return of lands taken illegally during the treaty making process. Likewise, the United States leases the land at Guantánamo from Cuba: to date, the United States government continues to send their lease payment to a Cuban government that refuses to cash the checks claiming that they want to end United States occupation of their territory. Thus, both sites remain haunted by imperialism in profound ways.

While the historic site is a symbol of American nationalism and has a large volume of tourists who come to learn of “Minnesota’s history,” there is an important history that is greatly contested and is often ignored at Ft. Snelling: the history of Dakota people’s relationship to this site. The US/Dakota war of 1862 is a dark and difficult history for Minnesota’s Indigenous people. On the brink of starvation and after a series of broken treaties, Dakota people fought back against the United States mission to eradicate all Dakota. Overpowered, Dakota people succumbed to the United States. After the war more than 1600 Dakota women, men and children were marched to Ft. Snelling where they were detained. Dakota people and other critics of US actions refer to these events as a “death march” to a “concentration camp” where many Dakota died due to disease and inadequate conditions. Regardless of this horrific history, Ft. Snelling does not make this knowledge a part of their national narrative. As such, the hauntings of imperialism have profound effects for Dakota people today.

We are dealing with a history in Minnesota, and the United States for that matter, that is profoundly contentious. We will be asking residents of Minnesota to recognize that Guantánamo, as a symbol and set of ideas, essentially exists in their own backyard. For many Minnesotans, we will be asking them to acknowledge Dakota perspectives on Ft. Snelling which will lead to confrontations with their historical past, which is very personal indeed. I imagine this will be met with some resistance by those who have the veil of American nationalism woven tightly to their face. Regardless of this contentious history, I am reminded that there is a profound sense of responsibility that I am undertaking in this project, especially considering the “difficult knowledge” that our group hopes to convey to the visitors. It is evident that we are involved in a project that surpasses the notion of merely knowledge sharing, but indeed are involved in a process of chipping away at historical amnesia, if such a thing is possible. Ultimately, we want to disrupt those narratives that people hold of both sites. We want to show that Guantánamo is everywhere, even in St. Paul, Minnesota.

Amber this concept is outstanding and I look forward to following its development.

This is an outstanding piece of work, and should be viewed by teachers and students, those who run our museums, and those who decide what should and should not be told. Only by telling can we understand, remember, ans shed light on what this past means today. Thank you for your work and your scholarship.