‘Voices from Guantánamo’ is a three-part cultural event series, produced by UNCG Public History graduate students, that will take place at the International Civil Rights Center and Museum. This series accompanies the Guantánamo Public Memory Project traveling exhibition, which will be showcased at the museum from December 12, 2013-February 1, 2014.

Behind the Cactus Curtain: Life at GTMO During the Cold War

The traveling exhibit opening will take place immediately before this event, at 6pm at the International Civil Rights Center and Museum.

How did Cold War tensions impact those who lived and worked at an American naval station that shared a border with communist Cuba? This panel will features three people who lived through this tumultuous time at the U.S. Naval Station at Guantánamo Bay.

Severed Roots: The Cuban and Haitian Refugee Crises at GTMO

In the 1990s, thousands of Cuban and Haitian citizens fled political and economic hardships in their own countries by boarding makeshift rafts that they hoped would carry them to the shores of the U.S. Facing harsh weather conditions in unseaworthy boats, thousands were picked up by the U.S. Coast Guard and brought to the U.S. Naval Station at Guantánamo Bay, Cuba. This program will explore the motivations refugees had for leaving their home countries, how the base handled the influx of refugees who were detained there as they awaited decisions on their asylum requests, the differences in treatment between Cuban and Haitian refugees, and the legal policies affecting these two groups.

Speakers include Brigadier General George Walls; Dr. Holly Ackerman of the Library of Latin American, Iberian, and Latino Studies at Duke; Deborah Weissman of the UNC School of Law; and Jorge Del Rio, who fled Cuba in 1994 as a Balsero (rafter).

Since 2002, the United States has detained suspected combatants in the ‘War on Terror’ at the Guantánamo Bay Naval Station. Many observers allege that acts of torture and inadequate access to due process have made Guantánamo a ‘legal black hole.’ Although President Obama vowed to close the base during his first term, 164 detainees remain at GTMO. How do we balance national security and human rights? Why has it proven so difficult to close GTMO? Legal experts, a former Marine intelligence officer, and an anti-torture activist will give their perspectives on U.S. detention policies in the wake of 9/11 and will explore what the future may hold for GTMO.

This very special event stands distinct from the rest of the ‘Voice of Guantánamo’ programing. Read more about the student team behind this event in this blog post. 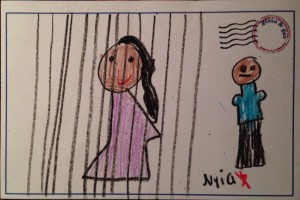 Child’s drawing of Madlenka in Jail. From Children’s Story Hour.