Prejudice and the Public Historian’s Role in Difficult History 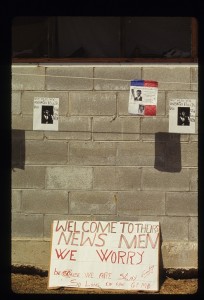 My classmate and I recently sat down with Harvard Law Professor Deborah Anker for an interview on the role of immigration law in the Haitian refugee crisis at Guantanamo. One of the first court cases that jumped to Anker’s mind was the Supreme Court case Jean v. Nelson (1985). Decided a few years before the crisis, the case presented clear evidence of discrimination against Haitian asylum-seekers and prefaced the controversial interdiction and detention of Haitians during the early 1990s.

Prior to fleeing the military overthrow of their democratically elected president in 1991, Haitian refugees had fled the repressive and dictatorial Duvalier government and submitted claims for admission into the United States. Under a new immigration procedure law, the Haitians were detained and their claims rejected, despite the fact that non-Haitian aliens were paroled into the United States without pause. A lawsuit was filed against the Commissioner of the Immigration and Naturalization Service (INS), arguing that the Haitian aliens did not receive the constitutional rights of due process and that their admission claims were rejected by INS officials on the basis of race and national origin. The Jean v. Nelson decision rejected the claim for constitutional rights, maintaining the precedent that aliens were not entitled to US constitutional rights. However, because the Administrative Procedure Act did not state that discrimination was permitted during the parole process, the aliens’ claims were granted approval for resubmission to the INS. The ruling also ordered the INS to prohibit the consideration of race and origin in its parole policy in order to reflect the nondiscriminatory statute.

Anker expounded on the evidence presented by the Haitian counsel, describing records of low level INS officials identifying aliens as Haitian and then rejecting their claims without full consideration. It was not legislation that limited the claims for entry, she argued, it was the people processing the forms. Additionally, discrimination was not illegal—it was simply not mentioned in the Administrative Procedure Act and therefore not permitted. While I was pleased to learn that discrimination was identified as an inappropriate practice in immigration procedures, it was shocking to realize that after being racially and ethnically discriminated against by federal procedures for years, the Haitian aliens were emancipated thanks to a technicality.

This situation brings up all sorts of issues, but the one that stood out to me was my initial desire to demonize those faceless government workers on the other side of the desk. I was forced to remember that people make the judgments that determine immigration procedures and harbor the prejudices that I cannot understand. It was so easy for me to condemn their actions and build my own prejudices against a group of people I labeled as racist.

As I reflected on my reactions and my intent on developing a career as a public historian, I was reminded that the public contributing to our history is a complex one. Despite my strong opinion on the treatment of the Haitians in the ‘80s and ‘90s, there are many sides to the story.  In addition, there are many people who do not know about this history—and the collection of materials offered by the Guantanamo Public Memory Project has the potential to provide the public with new understanding and perspective. With this in mind, the expansion of my knowledge on the history of Haitian immigration has not only helped me to form new personal opinions, it has reminded me to question how my own prejudices develop and inform the presentation of history to the public.