The Gift of an Oral History 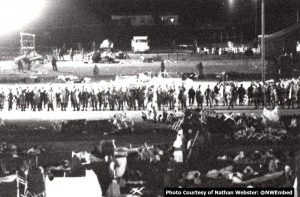 The oral history process begins far before the interview starts. The dialogues are far longer than the soundbite portraits they often become. The process by which a lead – possibly just a name or a phone number – becomes a historical source, is incredibly personal and fraught. A person’s memories are a vast and interesting source of information, but they belong to that person in a far more visceral way than any physical source of information ever could. In agreeing to be the subject of an oral history, a person is not only volunteering their time and energy. They are agreeing to recall memories, some painful and difficult to discuss, for ends that may not be their own; to recall that in which we are interested, whether or not it is the most interesting or important thing their memory bank holds.

Oral histories are gifts that people give us, not historical sources we have the right to access. This became clear to me as phone calls went unanswered and interviews were postponed; when a subject insisted on waiting until after the interview to sign a release, worried that he might portray himself in a negative light. All these things were aggravating, but entirely warranted. The difficulties that go along with acquiring oral histories are nothing more than the difficulties appropriate to treating people like people rather than sources. One can imagine the difficulties of researching history in a world where books can only be read or quoted with the permission of their authors, or if books yielded answers only to the questions they were asked.

I was concerned with the period of Guantánamo’s history when Haitian refugees were detained there in the early 1990s. The source material concerning those Haitian refugees is incredibly limited, which makes it all the clearer how informative and illuminating oral histories can be. Nathan Webster, part of an Army public affairs unit that arrived in Guantánamo on Thanksgiving Day 1991, described events about which “nobody knew because there was no media there, the only media was me . . . and the photos I took, I wouldn’t say they confiscated photos, that’s not accurate, but I gave up the negatives. I gave up the film, the original film, and you know, I never got it back. I don’t know where those pictures are, so there’s no record.”

There are many events and moments in time about which there are no records other than the memories of those who were present. Such is the nature of life and the nature of history. When those who do remember events are willing to discuss them, on the record, it is an amazing gift and resource. Those who have agreed to share the memories that make up the “Stories” section of the Guantánamo Public Memory Project have given the rest of us a gift. They have made their personal memories, their experiences, available to the world. They have answered our phone calls, agreed to meet us, answered our questions, and shared their lives with us.