Obtaining Refugee Voices: In Whose Interest Does the GPMP Act? 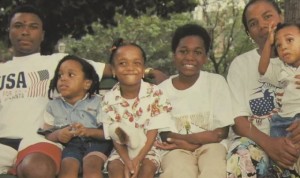 The Beaubrun family were detained at GTMO. Natalie and Gregory shared their story with our project.

While researching for and carrying out this project, one of the major ethical concerns I encountered was the issue of speaking for another person or group. Although one of the Guantánamo Public Memory Project’s main goals is to allow people to relate their own memories of Guantánamo, I found that such personal memories are incredibly difficult to obtain. When I began work on this project, the GPMP had only a small number of interviews relating to the crisis, and only one was by a former refugee. The others were with lawyers, social workers, and military officers. By the time my classmates and I had finished our work, we had collected oral histories from two additional lawyers, two foster parents, a social worker, and a journalist. Refugee voices, however, were nowhere to be heard. What we had gathered were only second-hand accounts – albeit from legitimately empathetic and concerned individuals – of the Haitian experience on Guantánamo.

This lack of direct involvement concerned me, particularly in light of Americans’ tendencies to speak for—instead of listening to—Haitian refugees. During the refugee crisis, Haitian concerns were subordinated to US ideas of “what was best” for the refugees. In the name of “safety,” refugees were picked up and returned to Haiti, so as not to encourage others to flee in “unsafe” boats.[1] US policy disregarded political persecution in Haiti, telling Haitians that they were better off risking assassination at home than risking escape via boat. Later, unaccompanied Haitian minors were sent back to Haiti, overriding the concerns of family members who had helped the children escape, and ignoring the fact that other family members were often waiting in the US to accommodate these children. [2] Even lawyers sympathetic to the Haitians’ plight found themselves deciding what was best for the refugees: lawyers for the Haitian Counsel Center v. Sale case angered refugees by claiming the best course of action was not to petition for their release, but to ensure that they had access to due process. [3]

Because of this history of Americans assuming the authority to speak for refugees, I approached this project feeling thrilled that the refugees would finally be able to tell their stories. What I found, however, was that many refugees’ memories were still too painful to talk about. While several refugees agreed to relate their stories through their former foster mother, Carrie Schuchardt, they also admitted that there were things that happened on Guantánamo that they would never tell us. Although I was irritated at first, I realized that I had once again been deciding what was best for the refugees. I was asking them to tell their stories; they were not asking me to hear them. The GPMP was important to me; it was not as important to them. Perhaps other refugees will feel differently, and perhaps the refugees who spoke through their foster mother are glad to have shared some information. I do not know; I never spoke to them. But in this project’s future, I hope that other researchers will approach their work mindful of whether they are acting in their own interest, or that of their interviewees.