Why and how is the U.S. Naval Station at Guantánamo, both historically and at present, relevant to Minnesota audiences?  In fall 2013, in anticipation of the opening of the GPMP exhibition at the Minnesota History Center, an interdisciplinary group of graduate students at the University of Minnesota created interactive digital public history projects that explore that question.

These projects cover broad interpretive terrain, ranging from the ubiquity of the orange jumpsuit in visual culture in the 21st century to expanding practices of surveillance and detention in the post-9/11 US to the ways that US imperialism has shaped seemingly disparate sites in similar ways.

These projects can now be explored online: 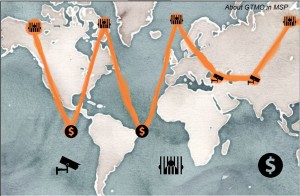 Amy Kaplan’s essay “Where is Guantánamo?” proved to be profoundly influential for several graduate students taking Professor Kevin Murphy’s seminar on the Guantanamo Public Memory Project. In this piece, Kaplan explains how the U.S. has utilized the unique geography and political history of Guantánamo to create a “legal black hole,” where new categories (such as the now ubiquitous “enemy combatant”) justify the criminalization, apprehension, and detention of migrants not only at Guantánamo, but around the world—including in Minnesota.  Kaplan asserts that, increasingly, we see Guantánamo everywhere. With several ICE detention facilities in the state of Minnesota, as well as ongoing police surveillance of the local Somali community in the Twin Cities since September 11, the GTMO in MSP group decided that in order to explore the question of Guantánamo being everywhere, we needed first to understand how Guantánamo is present in Minneapolis and St. Paul.

GTMO in MSP argues that Guantánamo is not just a place – it is a set of practices where suspicion, detention and torture exist at its naval base but also in local, national and international sites including Minneapolis/St Paul (MSP). Our project utilizes an interactive timeline that brings together the seemingly disparate histories of GTMO and MSP to encourage users to ponder the connections between these two places. We hope that the project invites the public to think about how increased trends in migrant detention and surveillance have impacted communities not only in Minneapolis and St. Paul, but in cities throughout the United States and the world. 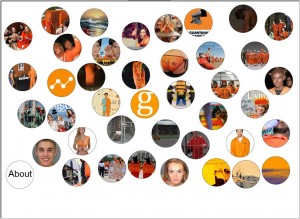 This project grew out of our interest in representations of GTMO in popular culture.  We collected images from film, public art, protests, video games, television, pornography, and parties.  Stepping back, we found that the ubiquitous orange jumpsuit connected these images – and gave each image its Guantánamo-ness.  At the same time, the orange jumpsuit also signaled US incarceration.  We wanted to understand how one object connects these sites throughout popular culture and thus our project evolved into a visual archive where users can explore how the orange jumpsuit represents, performs, and incites both detainment and incarceration. 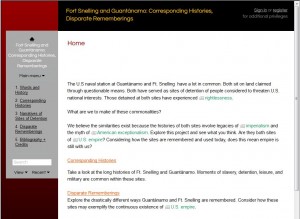 Guantánamo and Minnesota’s Historic Fort Snelling may seem at first glance to be quite different places, but a careful look at the history of these sites reveals that they have a lot in common.  Both sites include legacies of imperialism and have strong ties to the myth of American exceptionalism. What can we learn by analyzing these two sites in relation to one another, especially if we look closely at the ways they are memorialized today as sites of contested history?   By putting Fort Snelling into comparison with the U.S. naval station Guantánamo, we not only hope to add to the ongoing conversations regarding the contentious histories of Ft. Snelling but also to confront the misconceptions that many people hold of both spaces.

All interactive GPMP projects conducted by University of Minnesota graduate and undergraduate students can be accessed at http://gpmp.cla.umn.edu/web/.