August 4 2015: An ongoing investigation into whether there are carcinogens present in GTMO’s court facilities is currently taking place. The investigation comes amid recent reports that seven people who had worked on detainee trials, both military officials and civilian lawyers have been diagnosed with cancer. Three of these seven cases have been fatal, with only one of them being known to the public. The one person is Navy Lt. Cmdr. Bill Kuebler who represented Omar Khadr.  Currently all personnel have been removed from the court facilities and court activities have come to a halt. 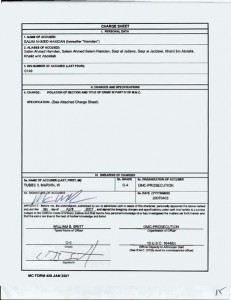 August 6th 2008: A military jury found  Salim Ahmed Hamdan, a former driver for Osama bin Laden guilty of supporting terrorism but not of conspiring in terrorist attacks. The judge sentenced Hamdan to five and a half years in dentition at GTMO. Hamdan had originally been tried in 2004 in the ad-hoc GTMO military commission system where he was found guilty and was given “enemy combatant” status. The 2004 Hamdan case sparked public debate as to the fairness and legality of GTMO’s  military commission system. Hamad’s case lead to the U.S supreme court case of Hamdan v. Rumsfeld (2006) which ruled that the military commission system violated U.S. and international law. The supreme court’s decision lead to Hamdan’s subsequent 2008 re-trail. As a result of the re-trial Hamdan remained detained at GTMO until November 2008 when he was transferred to Yemen, where he served one month in local prison before being released.