August 7th 2015: The American Psychological Association (APA) voted on Friday to adopt a policy of baring members from participating in national security interrogations. The vote came amid the controversy surrounding the recent release of  the Independent Review Relating to APA Ethics Guidelines, National Security Interrogations, and Torture (aka The Hoffman Report). The Hoffman Report found that APA leadership colluded with the Department of Defense and the CIA to allow psychologists to participate in post-9/11 enhanced interrogations at GTMO, CIA black sites and other locations. The report specifically showed that the CIA and Department of Defense worked closely with the APA to ensure that the organization’s code of ethics would be re-written in a way that enabled members to participate in their torture practices. While a faction of anti-torture psychologists within the APA have been pushing for this ban well before the Hoffman Report came out, the release of the report moved the vast majority of APA members to support the ban. 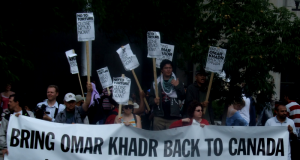 August 12th 2010: Omar Khadr’s military tribunal begins, but is halted immediately when his attorney collapses during the proceedings.  Khadr, a Canadian citizen had been captured in Afghanistan when he was fifteen years old and was sent to GTMO in 2002. Khadr was detained in GTMO despite his age and status as a child soldier. In this 2010 military tribunal Khadr confessed to participating in five different war crimes, for which he received an eight year sentence for. This sparked many human rights advocates throughout the world to protest his detention and trial given that he was a minor, under 18 when he had participated in these activities. On September 29, 2012  Khadr was transferred to Canadian custody  to serve the remainder of his sentence. His lawyers continued to advocate for his release in Canada.